System-building projects which fail (which is many of them) do so more often because they build the wrong thing, not because they do a bad job of building the right thing. The Agile community has developed a range of techniques for making sense of system requirements and capturing them in artifacts that are familiar and understandable by business, useful to developers and informative to managers.

The central concept is that of a “checked example”. This video illustrates some of these techniques and artifacts by example and discusses the impact that they can have on users, developers and managers.

One thought on “Agile Requirements by Example”

This talk is based on an extensive research with commercial organizations, government departments and non-profit agencies from all over the world that uses impact mapping. Gojko Adžić presents real-world case studies and distill their experience into useful tips that will enable you to speed up adoption, avoid common pitfalls and reach your goals faster. 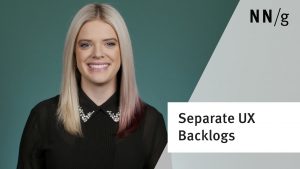 Agile development teams that struggle to keep track of UX work in the product backlog can utilize a separate backlog for UX. This method can help siloed teams where UX and development aren’t in direct communication. Separate UX backlogs do have pros and cons, which are discussed here.